Although a number of players from both teams had played in Bercy before, the first 20 minutes of the match were not very exciting. There were too many missed free throws and in general also a poor shot selection.

All the same Saint-Etienne dominated the opening quarter. They put together a 10-0 run to open up a 14-point lead before having to settle for a 10-point advantage by the end of the first quarter (20-10).

Anger's were second best when it came to rebounding. But with a smooth transition game they scored the first 6 points of the second quarter which resulted in a time-out called by Sébastien Nivet, the coach from CASE.

Nothing happened much after the time-out as both sides had a competition in missing free throws. Angers finished the second quarter with a 5-0 run to go into the interval trailing (30-34). 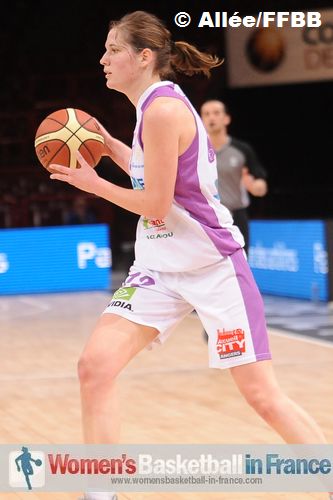 After the break Angers continued from where they left off with the first 7 points and Carine Brossais (in picture) on fire. The 11-0 run over the two quarters allowed Angers to lead for the first time in the match after 22 minutes (37-34).

Angelia Crealock then stepped up big time for CASE with 8 consecutive points for her side to edge back in front (42-40) with around 25 minutes played.

The intensity finally picked up as the game became more interesting with both sides hitting the target more regularly.

Angers went into the final quarter in front (48-47) and stayed until the 33rd minute when Alexandra lvovskaya tied the game (51-51).

Apart from the free throws both teams were playing excellent basketball and were still locked together after 39 minutes (60-60).

Aurélie Favre who is a product of the Bourges Basket youth academy swung the match in favour of Angers with a three-pointer just before the 24-second buzzer.

Favre and Sophie Le Marrec went on to split pairs of free throws in the remaining seconds as they hung on for victory.

Brossais' performance of 18 points which included a perfect 5-of-5 from the charity stripes made her the player of the match.

Return to the top of Coupe de France page