Emilie Gomis led the Villeneuve attack with 20 points and thought she had won the game with her last score of the game with five seconds to play.

However Clémence Beikes had other ideas and got the ball to Piotrkiewicz, who finished with a game high 21 points.

Rest of the basketball news of this Coupe de France round (last 32):

Roche Vendeé had no problems in getting past Limoges (77-50) while Aix-en-Provence required 21 points from Julie Page to get past US Laveyron (77-71). 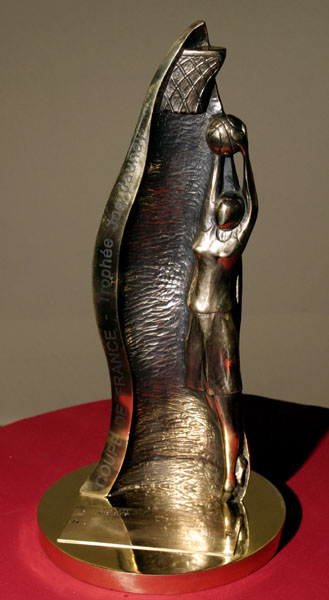 Lattes Montpellier were hustled by Voiron for 25 minutes (50-39) before putting their foot on the accelerator. They scored 21 unanswered points to put the game out of the reach of their hosts (71-39) going into the final quarter to end up winning (100-54).

Toulouse were given a scare by Charnay-lès-Mâcon in the first half of the match but recovered to dominate the second half to win (83-43).

Illkirch-Graffenstaden in the true spirit of the club gave Armentières a warm welcome for the cup match. They also used the occasion to welcome back their number one export Mélissa Micaletto.

Armentières were pushed all the way during the first quarter by their hosts (18-18) before pulling away in the second one (35-22). The SIG did not give in but were unable to make up the deficit and will have to give Paris Bercy a miss this year after falling (48-63).

The hosts Lyon BF won the all NF1 clash against Nice BC 06 (86-61) while the rest of the games went to the visiting teams.

In the last game of the round Rennes lost at home to Bourges Basket (54-90). Rennes led (19-18) after the first quarter with 10 points coming from Mijijana Evtoukhovitch.

Bourges stepped on the accelerator at the start of the second quarter and took control of the "Coupe de France de Basketball" game with a 12-0 run. This enabled them to go ahead at the interval (46-34).

Rennes used a lot of energy during the third quarter but left nothing in their tank for the final quarter allowing Emméline Ndongue and company to coast to victory.