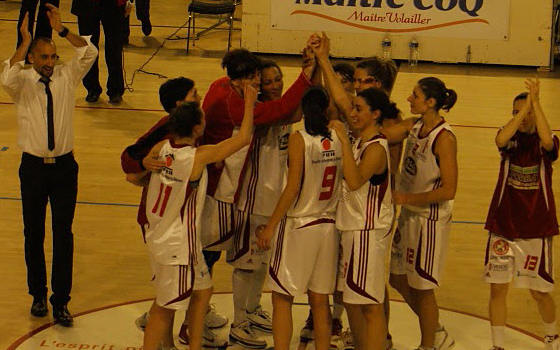 Toulouse had the better start to the game and led (6-2) early on. But the hosts started to win the battle of the boards and took control of the game to lead (20-12) by the end of the first quarter.

Roche Vendée's alternative inside-outside game continued to work well for them during the second quarter. They went into the locker room further ahead (41-25).

Toulouse played much better after the break and managed to reduce the deficit to 8 points (44-52) going into the final quarter.

The last ten minutes were intense. However Roche Vendée maintained a minimum advantage of 8 points for most of the quarter. With 90 seconds left to play the hosts led (65-56) and Toulouse's chance was gone.

Roche Vendée went on to win (74-62) and will meet in the quarter-final of the Coupe de France Tarbes.

Charleville-Mézières have a habit of eliminating clubs from the LFB in this competition. In 2007 they beat Nice. Last season it was the turn of Arras to fall to them.

In the last round they beat Calais. So it comes as no surprise that they beat Armentières (70-58). 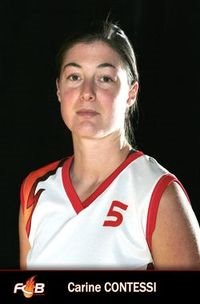 Charleville put together a 9-0 run early in the first quarter to open up a 10-point lead (16-6) with just over seven minutes played.

Armentières managed to stay in touch with a couple of three-pointers by Virginie Bremont and only trailed by the first quarter (15-23).

Carine Contessi and Bélinda M’Boma's three-point shooting enabled Charleville-Mézières to stretch the lead (33-15) and put their guests on the back foot.

Armentières were another team after the break and edged the third quarter 15-9. However they left themselves too much to do and ended up losing the final quarter as well as the match.

Contessi went 4-of-5 from beyond the arc to lead Charleville-Mézières with 14 points.

LFB leaders shine in the Cup

Pleyber-Christ's fans were happy for the first four minutes with their team leading (6-5).

Bourges Basket allowed the suspense to last 10 minutes (14-13) before turning on the turbo in the second quarter to go into the locker room leading (41-21).

Pierre Vincent turned his bench for the rest of the match as Bourges cruised to victory. 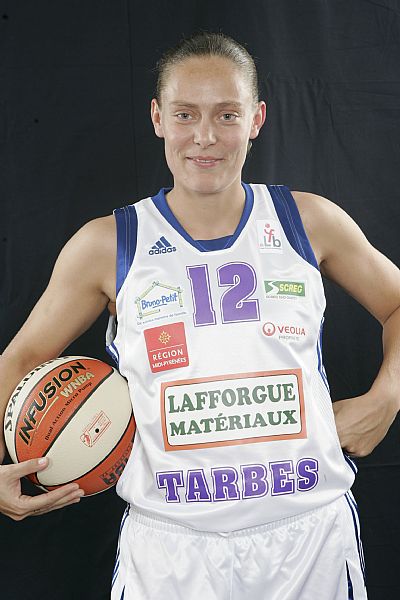 Tarbes beat Basket Landes in the all LFB clash (87-62). François Gomis turned his bench regularly as his side led from start to finish.

Pauline Jannault led the scoring with 19 points and Béatrice Castets (left) who went 4-of-9 from behind the arc finished with 14 points.

Arras beat UHB Saint-Amand (78-42) in the third game on Saturday evening. UHB have been hit with injuries recently and held their own for five minutes (6-8).

Arras then went into over-drive and led (20-11) by the end of the first quarter. Arras controlled the rest of the game to win comfortably.

Mondeville were made to sweat in the final minutes against Nantes-Rezé after leading by as many as 17 points.

Lindsay Taylor with 26 points and Katleen MacLeod turned things around for Nantes-Rezé. They put their side in front (63-57) with four minutes left to play.

Mondeville, playing at home, refused to let this Coupe de France game escape them. In a space of 60 seconds Mondeville were back in front after 5 points from Yacine Séné and a trey by Clarisse Costaz.

Nantes ran out of steam and fell further behind with Pauline Thizy and Costaz making the game safe (70-66).

For Mondeville Temeka Johnson was back to full speed and scored 13 points and dished out 6 assists.

Challes-les-Eaux eliminated Lattes Montpellier (65-60) in a match that was decided during the first quarter.

Challes-les-Eaux were leading (7-6). With Ivanka Mantic on 2 fouls Montpellier decided to go to sleep.

Montpellier spent the rest of the game chasing after the score and finished 5 points short.

K. B. Sharp and Kirby Copeland (right) scored 14 points each and dished out 5 and 4 assists in the victory.