To qualify for their third consecutive U19 World Championship France must finish in the top 5.

FIBA Europe have also introduced a new concept starting this season which will make the Division A preliminary group phase more intense.

In all the women's event three teams will be relegated to Division B, the same rules will also apply for the U16 and U18 men. 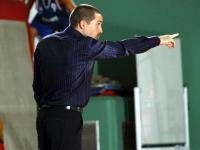 In 2012 no teams are relegated from the U20 Division A tournament but 4 teams are promoted from Division B. This means from 2013 2O teams will play in Division A.

Jérôme Fournier (in picture) who is the head coach of the France U18 team has decided to start his review of players much earlier this year. He has invited 26 players to attend the first training camp at INSEP in Paris during the last week of February.

He will be assisted by Cathy Melain and Grégory Morata.