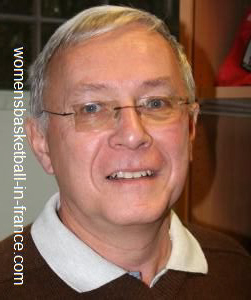 Luc Pfister said that the club invested a lot in youth basketball programmes and they put everything in place so that from the age of 12, the players had the chance to develop progressively. The club then went one step further with the minimes category.

However the big step was the creation of a basket academy for girls in the cadet category. Although they were not allowed to use the term "centre de formation".

Yet they had done everything required by the FFBB to be recognised officially as a training centre of basketball players.

This academy was not cheap because the trainer had to be paid and had to have the correct qualification. This function is performed by Claudie Hucault, who has at her disposal a physiotherapist, a strength and conditioning coach and a dietician.

That was not all because they had to find a high school that would accept the players and arrange the school timetable so that they could train regularly.

For this season they were 11 girls of which 6 in their first year.

Pfister was excited at the moment of the interview because the cadettes had been undefeated in the group. The results at school had been also good.

He was also looking forward to the game scheduled with Bourges Basket that weekend because he was at the opinion that his team could win.

For him Bourges Basket is the best academy in France. So with the good results at the moment and the results in school he believes that they are running their academy correctly. 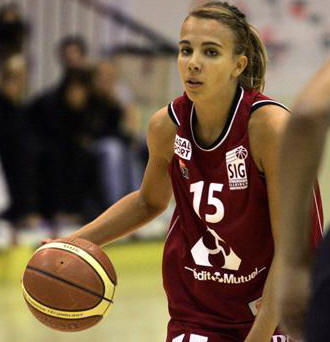 The club have an area for the players to do their homework because education is still important.

He added that it was not possible to predict how far the girls could go in the sport later even if they got to play professionally.

The reason for his excitement is that half the team are first-year cadettes and with the way they are winning matches it is encouraging for the future.

Two of the players in the academy are youth internationals. In the picture above, Célia Mauler (16) who made her début in NF1 last season was a member of the French U16 training roster.

Céline Pfister (15) was a member of the France U15 team that won the U15 4-nation friendship tournament (tournoi de amitié) between Greece, Italy, Spain and France during the summer in Italy.