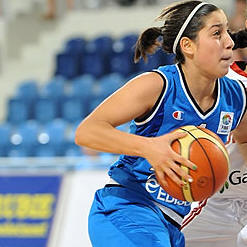 Italy's perfect record continues as they ran out winners against Turkey (62-53).

The Italians had to work hard for the victory and were behind (28-30) at the break. Turkey's first half lead was mainly due to the work of Olcay Cakir who had 12 first-half points.

Italy closed down Cakir after the break, restricting her to just 2 points for the whole of the second half as they calmly regained control. 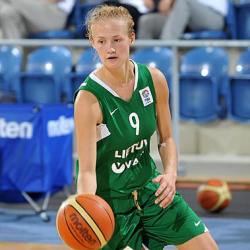 Lithuania found a simple solution for stopping Alina Iagupova from Ukraine. They went on a first-half blitz that sent them into the locker room leading (44-31).

They spread the scoring so that six players finished in double digits with Monika Grigalauskyte leading the way with 19 points. Laura Svaryte was next with 18 points.

he other players in double digits were Santa Okockyte with 14 points, while Neringa Skadaite (right) and Paulina Zaveckaite scored 11 points and finally Kriste Druskyte had 10 points.

Iagupova did score 29 points for Ukraine but it was not enough for her side to win the game.

France made it four wins in a row with a (66-56) victory against Poland. 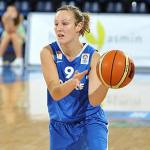 Héléna Akmouche was the top scorer for France with 19 points and was joined in double digits by Lucie Barba and Eléonore Grossemy who scored 10 points each.

France and Italy are already assured a place in the quarter-finals.

Belgium should be left wondering what they have to do to win a game in this tournament. They were leading Latvia (59-55) with just over two minutes to play when disaster struck. 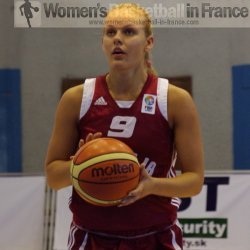 Lien Delmulle was called for a foul on Anete Kirsteine left). It was her 5th foul so she had to leave the game. To make matters worse, Kirsteine had three shots from the free-throw line.

She made all three and Latvia took control of the game and made 5-from-6 from the charity stripes to win the the game (63-59).

Kirsteine led the scoring with 24 points.

For Belgium it was a disappointing finish to an entertaining game. They scored the first 7 points of the games and despite allowing Latvia back into the game they edged the first quarter (13-12).

The second quarter was even with both teams finding good shots from beyond the arc. Belgium went into the locker room ahead (32-31) and stretched the lead by the end of the third quarter (53-48).

All the hard work of Lut De Meyer and Emmanuella Mayombo with 16 and 14 points each came to nothing as Belgium allowed the game to slip out of their hands.

Karolína Elhotová fired in back to back treys to open the scoring for the Czech Republic in their game against Hungary.

Hungary played catch-up for for about five minutes (8-9) and then struggled in stopping Barbora Kaspárková.

The Czech Republic took full advantage of their opponents' trouble and opened up a small gap (19-11) by the end of the first quarter.

The lead grew to 14 points after 15 minutes. The Czech Republic then stepped off the accelerator and paced themselves to victory (66-51).

Elhotová led the scoring with 16 points while Kaspárková added 13 points and collected 12 rebounds.