The game started poorly for both teams with just one success from open play with Taj Mc Williams scoring in the paint for the defending champions.

Halcon led (4-2) halfway through the first quarter with Silvia Dominguez and Belinda Snell going a perfect 4-of-4 from the charity stripes.

The introduction of Alba Torrens (right) sparked Halcon Avenida into action. She fired in a trey which was quickly followed by a second tree-pointer from Belinda Snell (10-2).

Both sides became more physical in the closing stages of the first quarter which resulted in free trips to the free-throw line for the Spanish side.

Despite picking 2 quick files Sonja Petrovic picked up a wild miss from beyond the arc by Jelena Milovanovic to tap in on the buzzer.

All the same Halcon Avenida led (14-8) after the first quarter.

Sue Bird opened the scoring in the second quarter from the free-throw line as both teams continued to be physical.

When Erika de Souza picked up her 3rd foul for an illegal screen (offensive foul) after 12 minutes she was forced to return to the bench.

Halcon Avenida weathered the storm with Sancho Lyttle scoring her first points of the game. Shortly afterwards Ana Montañana scored from the top of the key (18-10).

However the team from Salamanca dropped their guard allowing Russian international Irina Osipova to muscle her way in the paint to score and also win the free throw. 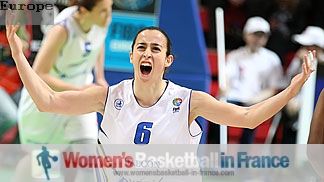 Halcon Avenida's coach Lucas Mondelo called an immediate time-out to refocus his players. He was quickly rewarded with Anke De Mondt hitting a trey while Lyttle secured all defensive rebounds.

Halcon's advantage reached double digits (28-13) after a sequence of 7 points where first Dominguez (left) managed to waltz her way for an easy lay-up.

Snell was then allowed to collect her own rebound after missing a trey for another easy lay-up before Dominguez connected from the land of many.

Pokey Chatman called for a time-out and changed her team's defensive option.

They switched to zone to stop their opponents while Mc Williams scored back to back baskets. A trey by Epiphanny Prince resulted in Halcon Avenida using a time-out.

The first half came to end with Torrens and Bird exchanging baskets and Avenida leading (30-22).

Both teams started the second half playing zone defense. Yet Sparta&K Moscow Region were quicker into their stride with the first 4 points.

Sparta&K somehow weathered the storm and finished the quarter with an 8-0 run. They further reduced their deficit with Bird adding 5 more points (43-50).

The fouls were mounting up quickly with Petrovic fouling out with 7 1/2 minutes to play.

The Spanish team's remaining points came from the charity stripes as they held off a ferocious finish by Mc Williams and Bird to win their first EuroLeague Women title (69-65).

You can watch game highlights on FIBATV