The first five minutes of this EuroLeague Women game was a private scoring match between Courtney Paris from Rivas Ecópolis and Sandrine Gruda from UMMC Ekaterinburg.

Paris was first to score her team's 7 points, while Gruda scored 8 points as her team led (10-7).

The game opened up and both teams scored points on the fast break. However with a trey by Céline Dumerc and points by Gruda and Crystal Langhorne, UMMC edged the first quarter (21-14).

The hosts were more lively at the start of the second quarter with Anna Cruz, Laura Nicholls and Vega Gimeno all getting on the score sheet.

Yet UMMC stayed in control and stretched their advantage after a trademark three-pointer by Agnieszka Bibrzycka (28-20).

Gruda's 12th point of the match gave UMMC a double digit lead (30-20) with five minutes left to play in the quarter.

Nicoll's burst of energy and a trey from the top of the key by Dewanna Bonner brought the hosts right back into the game and briefly excited the home fans (25-31).

UMMC slowed down the pace of the game while pushing the lead back to 10 points with points from Cappie Pondexter and Gruda.

Some careless defending by UMMC allowed Paris to sneak in the back door and score the last points of the quarter.

Gruda led the scoring with 15 points as UMMC went into the interval leading (35-27). 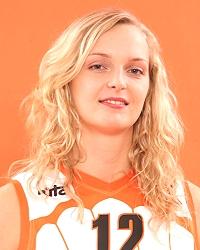 UMMC took too long on their first attack and by the time Bibrzycka fired in her shot, the 24-second buzzer had gone so her effort was not counted.

Bibrzycka (right) was not that happy. So on the next attack she got the ball early and knocked down the trey.

UMMC continued to dominate Rivas defensively and extended their advantage (49-33) after a fast-break score from Ann Wauters with just under five minutes left in the quarter.

Amaya Valdemoro was brought back in the game. Despite scoring she was unable to spark her team into putting a run together.

UMMC calmly concluded the quarter with three-pointers by Pondexter and Bibrzycka (58-40).

The final quarter turned into an exhibition as both sides relaxed on defense.

The guests started shooting three-pointers while Rivas did a lot of scoring on fast breaks.