Penny Taylor (left) has been having fun this season in the EuroLeague Women and finished the year with 37 points for Fenerbahçe in the road win against MKB Euroleasing (92-81).

Taylor scored 34 points during the second half of the game and played for just 28 minutes.

Fenerbahçe had to do without the services of Diana Taurasi. They were relieved that Nevriye Yilmaz was able to add 22 points and pick up 10 rebounds.

Angel McCoughtry who plays for MKB actually outscored Taylor with 39 points and kept her side in the contest for most of the game.

It is official that Galatasaray Medical Park cannot play away from home. They were beaten for the fifth time in this competition on the road and will be happy that they finish the first phase with two matches at home.

VICI Aistes who are without Ausra Bimbaite who is out injured went 14-of-30 from behind the three-point line in beating Galatasaray (91-86).

Vita Kuktiene who hit five times from the land of many led the way with 26 points for the hosts while Courtnay Pilypaitis contributed 20 points with 15 of those points coming from the three-point line.

Seimone Augustus and Sylvia Fowles scored 20 and 19 points each for the team from Turkey.

Halcon Avenida booked their ticket for the next phase with a comfortable home victory against Tarbes (87-49) with 16 points coming from Anna Montañana.

Gospic Croatia ended the year on a high with their first victory in the competition by beating Lotos Gdynia (98-83).

This result favours MKB EuroLeasing who have now qualified for the next phase as neither team can overtake them in their EuroLeague Women Group.

Lotos Gdynia or Gospic Croatia can still qualify but this all depends on them both beating Rivas Ecópolis.

There was more drama in Group A with USO Mondeville losing at home to Pécs 2010 (62-66). This is the fourth straight defeat for the French side who are now on level points with Pécs 2010.

Valeryia Berezhynska who led the Mondeville attack with 22 points explained: "We should have won this game. We were much stronger inside but we didn't manage to use this strength. We lost this game ourselves because we missed many easy shots and we made too many mistakes in defense." 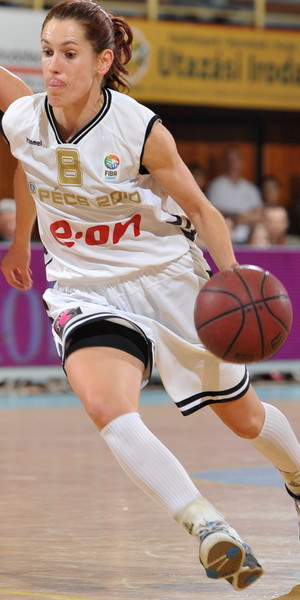 Her opinion was not shared by Zeljko Djokic, the head coach of Pécs 2010 who explained: "We had prepared for this game better than for the first game in Pecs. We managed to control the two most dangerous players, Sharp and Williams, who had a very good game in Pécs. The most important thing tonight was the very hard defense we played which allowed us to keep Mondeville at 62 points."

Zsófia Fegyverneky and Dalma Ivanyi (right) were in double digits with 18 and 13 points for the guests from Hungary.

Good Angels had a comfortable victory against TTT Riga (70-48) after blowing away their guests 22-3 during the third quarter.

Charde Houston had another strong game for Good Angels with 19 points and 9 rebounds while Candice Dupree contributed 15 points and 13 rebounds.

Cras Basket will finish on top of EuroLeague Women Group A after beating Wisla Can-Pack Krakow on the road (58-57).

Elodie Godin (left) hit what turned out to be the game winning basket with 30 seconds remaining in the game. She was also the top scorer for Cras Basket with 14 points.

Michelle Greco added 10 points and dished out 8 assists for the Italian team.

Erin Philips who scored 18 points for Wisla Can-Pack had an opportunity to put the hosts back in front but the ball refused to drop.

José Hernandez, the coach from Wisla, was disappointed with the defeat and said after the game: "I am sorry. We lost and it is mine and my players' responsibility. We cannot make such stupid turnovers. They should not even think that, they are professionals. We have time now to think and analyse all that happened."

In Group D, Bourges Basket and Beretta Famila both lost but have still qualified for the next phase.

Ros Casares went back on top of the group after beating Beretta Famila (65-51) and also booked their ticket for the play-offs.

Katie Douglas scored 18 points for the Spanish hosts while Rebekkah Brunson compiled a double double of 14 points and 14 rebounds.

Frisco Sika Brno have to thank Cheryl Ford for her 20 points and 20 rebounds as they held off KSSSE AZS-PWSZ Gorzow in overtime (71-64).

The Polish side managed to force overtime after a triple by Agnieszka Skobel (58-58) in the last few seconds of regulation time.

However overtime was not kind to them after youth international Alena Hanusová put her side in front for good from the charity stripes with four minutes to play.

This victory does not help Frisco Sika Brno who can not finish higher than fifth and will not take part in the EuroLeague Women eighth final.