EuroLeague Women news from game one for top 3 seeds

Fenerbahçe turned on the style to defeat Galatasaray (77-58) with 24 points coming from Nevriye Yilmaz.

The all-Turkey clash remained close during the first half with Fenerbahçe leading (36-33).

An 11-0 run after the break put Fenerbahçe in command for the rest of the game. For Galatasaray Seimone Augustus scored 19 points.

Fenerbahçe who finished the regular season undefeated are the only team with a perfect record in the competition this season.

The number three seeds Halcon Avenida, also from Spain, were given a tough workout by Pécs 2010 before securing the victory (76-60).

With three minutes left to play Pécs 2010 trailed (57-64). They were unable to get any closer because Erika De Souza and Alba Torrens went on a scoring spree.

However the scoring award in this game went to FIBA Europe postcard blog writer Alexandria Quigley (Pécs 2010) with 22 points.

Sandrine Gruda had an almost perfect day in scoring 21 points for UMMC Ekaterinburg as they edged out Rivas Ecópolis (63-58).

The third meeting between the two sides this season did not produce much fireworks from behind the three-point line but remained close and entertaining.

UMMC playing at home found themselves trailing (47-50) with less than a minute played in the final quarter.

Maria Stepanova then stepped up for the hosts and UMMC regained the lead for good.

Candace Parker was the only other player from UMMC in double digits with 10 points. French Captain Céline Dumerc scored 5 points and handed out 3 assists. 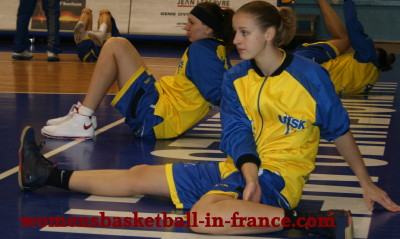 Cras Basket were the only top seed to lose in game one.

They allowed Katerina Elhotova (left) with 21 points and ZVVZ USK Prague to win the game (73-53).

Eva Vitecková and DeLisha Milton-Jones (10 rebounds) added 19 and 13 points each.

Roberto Ricchini, the head coach from Cras Basket, summed up the match as follows: "We only lost the battle, not the war. I have already looked my players in their eyes, I feel the revenge in Prague. But it's important finding our basketball." 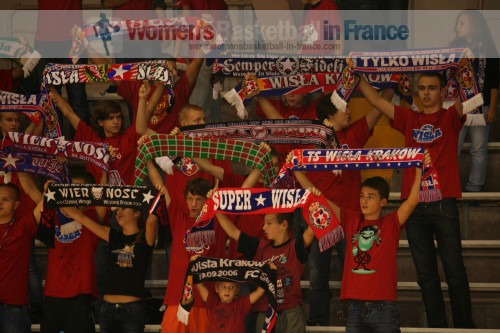 The fans of Wisla Can-Pack were in good voice for most of the game.

Despite the efforts of Tina Charles, Wisla Can-Pack looked home a dry after a triple by Nicole Powell (66-54).

Charles and Liudmilla Sapova had other ideas and shared the 12 points to bring the teams level (66-66) with 80 seconds left to play in regulation time.

Neither team was able to score again and in the dying seconds Sapova fouled out.

After almost seven minutes without scoring the arena erupted after Ewelina Kobryn hit a pair of free-throws. The joy was short lived with Charles scoring again.

However the hosts regained control with 2 more points from Kobryn and then stayed ahead for the remaining time to win the first game in the tree-match EuroLeague Women series.

Erin Philips finished the game with 18 points for the winners.

Sparta&K Moscow Region, Vidnoje had to thank two Serbian players from the 1989 generation for easing past Beretta Famila Schio (65-60).

Jelena Milovanovic (right) and Sonja Petrovic scored the last 17 points between them as they led EuroLeague Women Champions Sparta&K to victory.

French international Isabelle Yacoubou-Dehoui scored 17 points for Beretta. She was outscored by Liron Cohen with 18 points but was joined in double digits by Janel McCarville with 15 points and 14 rebounds.