Day 7: Another rest day for France but EuroBasket continues for group E

France had invited for the third time the media to their hotel for another round-the-table conference. This time it was the turn of Emméline Ndongue and Edwige Lawson-Wade to face the questions.

At the same time Sandra Dijon was happily speaking with the Spanish media in Spanish.

For the French media Jacques Commères rounded the session up and spoke a little bit about their victory against Belarus and their preparation for the match against Spain.

Apart from this, we had the pleasure of talking to Audrey Sauret-Gillespie, the captain - who will be moving to Italy this season - and Céline Dumerc - known as Caps - about the format of the competition. The duration has been stretched out with additional rest days after each game between the second-phase matches. It is up to the players to adapt and occupy themselves outside training. Audrey added that since she has participated in the first championship (this edition is her 6th EuroBasket final round appearance) the hierarchy has changed with the developing basketball nations are now on par with the traditional strong basketball nations. There is also a new generation of young and athletic basketball players showing their skills and changing the dimension of the game.

This last observation from the French captain demonstrates that "women playing basketball" has really evolved over the last decade and has become more professional.

We did not watch any EuroBasket games on the seventh day, which was unfortunate as the whole group is very open now with defeats of Germany against Turkey, Belgium against Latvia and Lithuania against Czech Republic!

Just when France had thought the game was theirs for the taking, up stepped Valdemoro with moments of brilliance that hyped up her team-mates as they hit France for 13 straight points during the deciding stanza to come back from the dead to beat France in the most exciting game of the evening. France's continuation in Eurobasket now depends on their last group match against Serbia whereas Spain have now assured minimum second place in the group.

After the match a few players and the coaches from both teams commented on the outcome:

Audrey Sauret-Gillespie said that the difference between Spain and them was the confidence factor. She concluded that where the Spanish ones inspired each other on and off the bench even in difficult moments, the French players however did not have the same confidence level especially against defensive zone and full-court press of their opponents. Therefore the French team was not able to shoot well from the field and hence not able to build their offensive options.

Whereas Sandra Le Dréan added that they lost today to a very good Spanish team. She was not sure if it was tiredness towards the end of the match which cost them the victory. She also admitted having difficulty with the Spanish defence.

And finally Edwige Lawson-Wade summed up differently and thought that they had everything in hand to beat the Spanish team. Once the opponents switched to zone their problems started. But they still held the advantage until Valdemoro and Sanchez found their mark. The game slipped away. They did not help themselves with a low-field-goal percentage throughout. Particularly she reckoned they had problems in their offensive game.

In the end even Jacques Commères agreed that they had played against a strong team which did not loose their head while under pressure and defended well especially at the end. Also his players should have attempted to take more open shots.

Then from the Spanish team the head coach, Evaristo Peréz, said that his team had difficulty at the beginning due to the physical nature of their opponent but after the interval things got better. As they knew about the French players' difficulty in zone they switched, which was the key for winning the match.

Furthermore Anna Montañana commented that it was a good win for them because they had to come back from far. France was well organised in the first half and the Spanish tried to play them at their game, but when her team applied the zone during the 3rd period, the game switched in their favour. They knew then that the French had trouble playing against this system. The win was good but Spain cannot afford to play like this and hope to win all their future EuroBasket games.

Also Marta Zurro analysed that the game was very balanced until the final quarter. Their earlier problems were due to the physical strength of France but once they found a solution for this in defence their offensive game improved and they managed to win the match.

"It’s been a really difficult game", Valdemoro added. “It’s probably been the most intense game of the tournament so far. In the third quarter, when France were up six points, we had a big problem with (their) offensive rebounds. But we never gave up. We showed the will that we’ve shown in recent years. I think all the players have contributed. Our centres had a big job to do today because France’s interior play is incredible.” 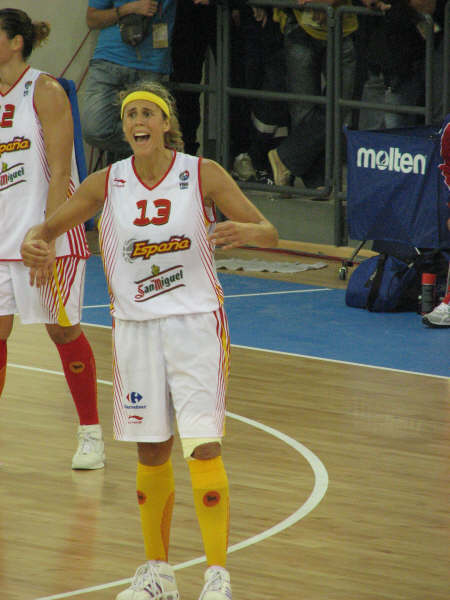 The first match of the day was a winner-takes-all match between Turkey and Lithuania. It was not a classic game but came to life in the final period with some excellent shooting from the land of many. Rima Valentiene hit four 3-pointers in the closing minutes, while Iveta Marcauskaite hit two others from beyond the arc to end Turkey’s dreams at the wire (67-61). It was not possible to speak with the players from either side as they had to leave quickly but Iveta Marcauskaité did stop to have a little chat about the game and her philosophy.

The next match on the agenda was a decider on who would finish in first place. Belgium need to win to avoid finishing third in the group. It was an enjoyable match with the lead changing on nine occasions and tied no less than 16 times. Ann Wauters had another massive game for her country and I believe Kathy Wambé had her best game of the tournament so far. Anke de Mondt was dangerous early on from the 3-point territory but by the second period the Czech Republic had a solution for her. You have to take your hat off to the defending champions and especially Eva Viteckova who took the game by storm in the deciding quarter as her team’s experience as a group came into play as they clawed back a 10-point deficit in the closing minutes to take the game (72-70). What was nice from both teams at the end of the match was that they made themselves available to talk with the media. We had to let Anne Wauters go because she was bombarded from all angles and we had spoken with her the other day.

Germany, already eliminated, played poorly in the first quarter but then overcame a 10-point deficit to lead at the interval. Their opponent, Latvia, put things in order in the second half of the match with Gunta Basko orchestrating affairs and went on to win the game comfortably (60-47).

Day 10: EuroBasket 2007 ends for the host Italy and also for the youthful Serbian side

Italy were surprised by the change of style of play from Belarus and succumbed(66-51)despite the backing of the home supporters as they never got into the rhythm.

The much awaited encounter between Russia and Spain lived up to its expectation and for three quarters both teams played excellent end-to-end basketball. Maria Stepanova‘s head-to-head battle with Amaya Valdemoro in the second quarter came to a climax as they demonstrated why they are considered to be amongst the best women basketball players in the world.

The pendulum switched into Russia’s favour with a brutal acceleration of pace alternating fast breaks, mid-distance shooting and outside play in the beginning of the fourth quarter. The Russian’s head coach, Igor Grudin, spoke to us after the victory about the importance of winning this match and qualifying in the best bracket position for the rest of the European championship competition after taking the game (64-49).

The last game of this day was France against Serbia, played very physically and was marred by some poor officiating and an accidental clash of heads between Audrey Sauret-Gillespie, the French captain (requiring a few stitches), and Miljana Musovic. Serbia gave France a fright in the first period leading by 9 points. (12-21). Despite not being able to hit anything from anywhere, France’s excellent defence and fast-break-transition play enabled them to take control of the match. Sandrine Gruda was in particular good form and made her presence count during critical moments. France won (68-60) and will meet Latvia in the quarter-finals on Day 11, where these two nations have the honour to open the new arena Pala Tricalle in Chieti. 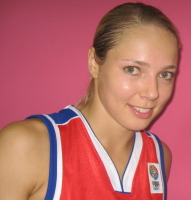 Ilona Korstin (no. 10 from Russia), face of FibaEurope's year of Women's Basketball and former player of the French club side Bourges, is looking forward to the knock-out stage of Eurobasket 2007.