The match started full of promise as the hosts held themselves defensively while leading briefly (5-4) with just over five minutes played.

Back to back scores from Zoi Dimitrakou finally got Charleville-Mézières going and to finish the first quarter leading (15-7).

Charleville were never really troubled for the rest of the game and paced themselves to victory with Djéné Diawara leading the way with 16 points. Dimitrakou and former COB Calais player Anne-Sophie Pagnier added 13 and 11 points each.

For Calais Britany Miller led the scoring with 14 points.

Charleville-Mézières will face the winners of the game: Sin Dechy Ostrevent (NF2) vs. Villeneuve d'Ascq.

Yuliya Andreyeva's 3 three-pointers towards the end of the first quarter sealed the fate for Le Havre as they trailed (10-27). 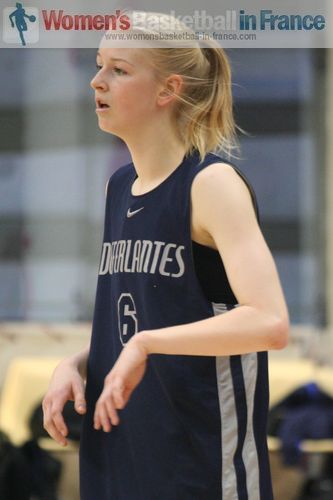 Laurent Buffard rotated his players frequently throughout the game while giving extended runs to some of his bench players.

Claire Stievenard (in picture) was given her first chance in the starting five. She finished the game with 10 points. However the star of the night was Andreyeva who connected 7 times from 9 attempts from behind the arc for a game high 25 points.

For the hosts Kayla Smith, their top scorer was not in the line-up, and with Ida Preetzmann having a 0 scoring day they struggled offensively. Bintou Diémé did her best with 13 points but it was not enough.

Despite a poor third quarter with just 7 points scored Nantes-Rezé cruised to victory (70-44).