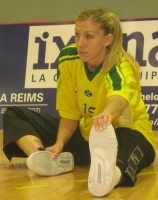 Marie-Laurie Kindoki-Fleury has a NF1 championship medal in 2003 with Calais and missed out on a second medal with Reims because she spent last season playing for Mondeville. On the 25th April 2007 her performance against Montpellier in the quarter-final playoff is now part of Mondeville’s folklore as she led her side in scoring as they beat Montpellier in the first leg (83-72) on their way to the semi-final.

That was then and now she is back with the task of leading a young side into the LFB, Marie Laurie and Zuzana Klimesova, at only 28, are the veterans in this team.

Marie-Laure said that she already knows the club and how they operate and this year it is a new team in a new championship after some time in NF1. The aim of the club is to stay in the league and to achieve - that it is important - to win as many games at home as possible to facilitate their task and naturally win some games away so that they can escape the dog fight concerning possible relegation at the end of the season.

Concerning their LFB team roster which is made up of young players this could be viewed as their strongest asset but at times it is also viewed as a weakness. In a few words this is a team that is motivated, exciting, hard working and do not give up and since the beginning of the season have already demonstrated that they are not here for the ride. Their participation should be interesting for the rest of the season. The Open LFB was an experience that did end well for them and naturally the players were disappointed when they lost. Okay it was against USVO and lessons can be drawn from it but in the end they were defeated and that hurt. USVO are a good team and when they played them she was of the opinion that the opponents were not 100% ready. So it was probably the best time to play them. That is history and the overall performance for the team was good but they have to move on.

Marie-Laure does not only play basketball but she invests some of her time training the youngsters at the club. She likes to share her experience playing basketball with children and introduce them to the game. She is of the belief that it is very important for young players to have a chance to pick up a trick or two from active players which hopefully reinforce what they learn from other coaches. Working with very young players is emotionally rewarding and interesting.

Marie-Laure gives a short description in French of Reims 2007-2008.

Reims have had a policy of working with young players and Anne-Sophie Pagnier is a typical example. She is a product of the French basketball youth system. In her early teens she played representative basketball for her region and was integrated into one of the basketball centres of excellence at 14/15 of age (Pôle Espoir Nord/Pas-de-Calais). On leaving this structure she moved on to the CFBB.

She had a big decision to make after leaving the CFBB. She had many offers from different clubs and chose to join Reims in NF1 because of study options. She explained that she did not have the best of grades. Reims offered her the best structure to play basketball and continue to study in parallel. The good news for her is that she passed her A’ levels (baccalauréat) and afterwards has obtained a professional diploma in accounting. The promotion to the LFB is just the icing on the cake.

Anne has also had the experience of participating for France at U18 and U20 at European championships winning both times a bronze medal. She enjoyed playing for her country at these championships, it is something special to her.

At Saint Jacques Sport things are good, the roster is complete with the arrival of Mia Fisher and now they will try and win as many games as possible to stay in the LFB, the Ligue Féminine de Basketball.

Anne-Sophie explains why she joined Reims after leaving the CFBB and how things are at the club in French.

Anne-Marie Parau is Romanian and has joined Reims after a season playing for Dexia/Namur in Belgium. She said she was very happy at St. Jacques and she added that this team is very young and for the moment things are going well. She indicated that she picked up some French while in Belgium so she feels also alright with the language here.

Anne-Marie at the age of 23 is already a very experienced international player starting her professional career in her country seven years ago. Already in 2001 she participated in EuroBasket Women and four years later she had the chance to participate again for Romania. 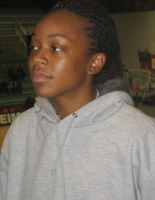 Mia Fisher only joined Reims a week ago and is already enjoying the challenge. She comes from the USA and has been playing in Turkey for the last two seasons. On the audio you will find out more about her first impressions of playing basketball in France. 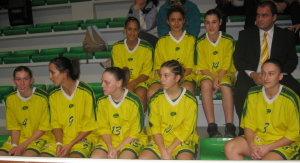 The Basketball academy, known in French as the centre de formation, is run by the assistant coach of Philippe Sauret, Olivier Audegond. With the promotion of the first team to LFB French rules dictate that the club must have a second team playing in the national league. For Reims it is this year in NF3, nationale féminine 3 with Olivier Audegond as coach. Last Saturday this squad played the opening match before the fourth round of LFB at the sports hall René Tys. As already mentioned by Anne-Sophie Pagnier the club tries to help young women players to play basketball and go on to higher education. In this squad there are a medical, a law student and a BTS students (higher national diploma). Furthermore there are five U18 players who are still in school. And the squad has also an experienced player, Stéphanie Blanquart, who helps them with their court awareness and she is also on the LFB team roster.
Furthermore the centre de formation has a U18 team playing in the national championship with Stéphanie Vivenot as coach.