Christmas could not have come sooner for Challes as the players were in need to recharging their batteries after losing their last two games. Not withstanding Challes are well placed in the league with a 6-4 record. Furthermore they are still in the EuroCup Women competition.

Corinne Benintendi is the only woman leading a team in the Ligue Féminine de BasketBall but has made her mark for women playing basketball in France. Two young ladies, fresh from NCAA basketball and a rookie season in the WNBA, Jessica Davenport and Tiffany Jackson, have both strived under her guidance.

Davenport and Jackson are having a great season. Their presence has taken some of the pressure off their captain Martina Luptakova.

Challes have a tough programme in January with road trips to Bourges, Mondeville and Mourenx. They also have a trip to Orenbourg in Russia for the Eurocup.

Adriana Moises Pinto was signed at the start of the season as medical cover for three months. Officially her time is up but the question is why would Montpellier let her go after her performance in their last match of the year with 20 points, 3 steals, 4 assists as well as drawing 9 fouls.

The club played with only six players in their last match and Olga Podkovalnikova’s days in Montpellier are over as she will continue her career in Spain.

In November Meredith Alex was playing in Poland and then an opportunity arose to replace Naré Diaware for eight weeks due to a stress fracture. Alex came to play one match and the club decided that she should stay until the end of the season while releasing Diaware.

Fiba Europe released on their website the names of players that people can vote for to play in the EuroLeague Women all star game between Europe and the Rest of the World.

Mondeville have four players on the main list. For the Rest of the World it is Alex (after only two matches but under the wrong category: guard) and Lenae Williams. Caroline Aubert and and Naura El Gargati are on the selection list for Europe. 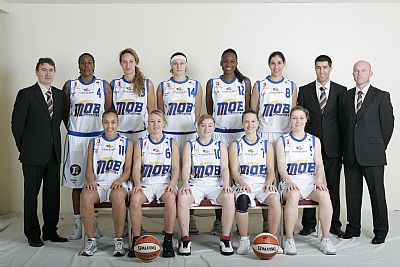 Fabrice Courcier completed his recruitment very early. Once he got his players together at the beginning of the season, he went to work on turning them into a collective unit. Already the offensive work is shared equally with four players averaging double digits with Ines Ajanovic 11.3 ppg, Tamara Moore 11.9 ppg, Olena Ogorodnikova 12.4 ppg and Tiffany Stansbury 12 ppg.

The club have developed a system that has enabled them to integrate their youth players into the LFB roster without disrupting their programme. Like all the clubs in the LFB Saint Amand are required to field a second team in one of the lower divisions in the national league.

Tarbes finished the year without a coach because Patrick Maucouvert handed in his resignation immediately after their last home game. The team has also been still without Isabelle Yacoubou but she is expected back in January.

Tarbes’ league form is nothing to write home about. Yet with the two victories attained during the reign of Patric Maucouvert they moved out of the relegation zone.

They are also still involved in the FIBA EuroCup Women competition and will be in Bosnia in January to face BC Zeljeznicar.

USVO will be back in action on January 3 for a friendly match with Arras. Although this is a friendly match, there will be an entry fee because all match receipts will be given to a charity called TC Humanitaire.

Kathy Wambe is the current assist queen in the LFB with 10.3 apg and is also on the FIBA Europe all star voting list. Return from LFB news to LFB Information Directory


Pictures courtesy of the Ligue Féminine de BasketBall and Basquetbol.org